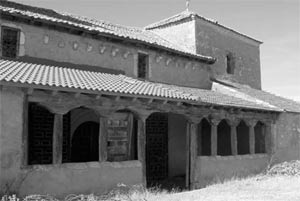 Population belonging to the City Council of Alcubilla de Avellaneda, located at an altitude of 928m, along which the Perales River flows.

In this village you can find the Church of Santiago Apóstol which maintains the half-point façade, which is half-hidden by an adobe wall. It has a ball chambrana, two archivolts boceladas and another one of thick sogueado, that support on nacelled courgettes, jambs aboceladas as a little columns and three capitals on each side, with vegetal and zoomorphic motives. Above, we can see ship bow dogs, which are without function because the walls have been re-erected. The straight head is perforated by a half point that delimits an internal pocket, its capitals are vegetal. Inside, we can find a baptismal font with a bocel in the embouchure and a narrow record of rough rollers, the rest is a succession of semicircular arches. The innermost archivolt has a triple zigzag decoration, typical of Segovian buildings.

On the outskirts of Zayas de Báscones passed the Cid in its exile stage, so that cyclists can enjoy this stage 4 of the Camino, with destination Castillejo de Robledo. In addition, the Route of the Wool, a commercial road that transported the wool of La Alcarria and the cloths of Cuenca, honey and cereal to Medina del Campo and Burgos, and that today runs through the town until arriving to Mecerreyes (Burgos), being one of the points of passage of the pilgrims towards Santiago de Compostela.